Education For All Our Children: Embracing Diverse Cultures - Summary of draft for consultation 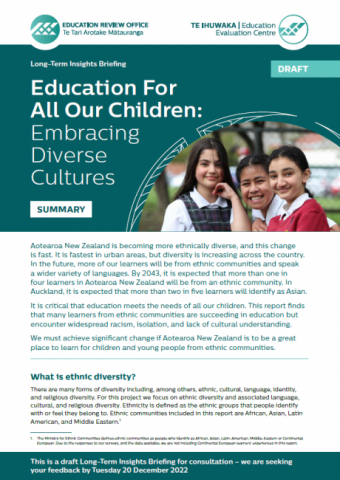 Aotearoa New Zealand is becoming more ethnically diverse, and this change is fast. It is fastest in urban areas, but diversity is increasing across the country. In the future, more of our learners will be from ethnic communities and speak a wider variety of languages. By 2043, it is expected more than one in four learners in Aotearoa New Zealand will be from an ethnic community. In Auckland, it is expected that more than two in five learners will identify as Asian.

We must achieve significant change if Aotearoa New Zealand is to be a great place to learn for children and young people from ethnic communities.

This is a draft for consultation – we are seeking your feedback

The closing date for submissions is Tuesday 20 December 2022.

Translated versions of this summary:

Education For All Our Children: Embracing Diverse Cultures - Summary of draft for consultation

What is ethnic diversity?

There are many forms of diversity including, among others, ethnic, cultural, language, identity, and religious diversity. For this project we focus on ethnic diversity and associated language, cultural and religious diversity. Ethnicity is defined as the ethnic groups that people identify with or feel they belong to. Ethnic communities included in this report are African, Asian, Latin‑American, and Middle‑Eastern.[1]

What does ethnic diversity look like in Aotearoa New Zealand schools, and how is this likely to change?

Aotearoa New Zealand is becoming more ethnically diverse, and this is changing quickly.

Figure 1: Proportion of learners in Aotearoa New Zealand who identify as Asian or MELAA

Figure 1: Proportion of learners in Aotearoa New Zealand who identify as Asian or MELAA

Figure 2: Proportion of learners who identify as Asian by 2043 for Auckland and Southland

Figure 2: Proportion of learners who identify as Asian by 2043 for Auckland and Southland

What are the educational experiences of learners from diverse ethnic communities and their whānau?

Many, but not all, learners from ethnic communities achieve well in education.

Looking at NCEA Level 2 results, Filipino, Indian, Japanese, Vietnamese, and Korean learners all achieve above the national average. However, there are significant differences across ethnic communities, and within all ethnic communities there are learners who are not achieving well.

Learners from ethnic communities often do not feel they belong.

“I feel like the only time you can interact with your own culture is culture week.”

Learners from ethnic communities experience widespread racist bullying, which too often is not taken seriously by their school.

One in five learners have experienced racist bullying in the last month, and over half have seen others being bullied because of their ethnicity. Both whānau and learners report racist bullying needs to be better identified and addressed at school.

“I still feel kind of weird taking Indian food to school as you have to eat it with your hands. One of my friends—she is Indian too, got bullied so badly for her food (smelly) that she became a loner. And she tried to bring sandwiches to school even though she didn’t like the [taste], but it was too late.”
- Learner

Whānau from ethnic communities face barriers to engaging with schools.

They attend parent information sessions more than any other activity but find information about their children’s learning insufficient or confusing. They are significantly under-represented on School Boards.

Many learners from ethnic communities go on to tertiary study, but pathways are confusing and for some, choices are unfairly constrained by teachers’ biases.

More than one in four secondary learners report that teachers’ recommendations for their course selection are influenced by ethnicity, and only half of secondary learners are fully happy with their subject choices. Both learners and whānau find NCEA confusing.

“I still don’t know what I want to do when I leave here, and I think it gets more and more urgent each passing day because as I move on through the years, the options get narrower and narrower and I need to make a decision on a set pathway to go down - had an initial conversation about pathways in Year 9, but not really anything since.”
-  Year 11 learner

How are schools meeting the needs of learners from diverse ethnic communities and their whānau?

Teachers’ understanding of their learners, including their culture, is key to learners’ experiences at school, but this needs building.

Whānau and learners are concerned about teachers’ lack of cultural knowledge and awareness. Teachers report having limited awareness of learners’ cultural and learning needs. More than half of teachers do not feel confident connecting with ethnic communities. Half of the learners from ethnic communities reported having their names mispronounced by their teacher.

What are the implications for education?

We have identified four big implications when considering the future of education in Aotearoa New Zealand.

What are the implications for the future?

Many learners from ethnic communities are achieving in education but they have to overcome widespread racism, isolation, and lack of cultural understanding. We need to change. We will need action in five areas to ensure Aotearoa New Zealand is well-placed for the future.

These are not quick actions; they will require sustained effort over coming decades. But the cost of not acting will be immense not only for the one in four Asian and one in 20 MELAA young people from ethnic communities by 2043, but for New Zealand’s social cohesion, economy and future.

If you want more detail about this project, our report is available on our website:

[1] The Ministry for Ethnic Communities defines ethnic communities as people who identify as African, Asian, Latin-American, Middle-Eastern or Continental European. Due to the responses to our surveys, and the data available, we are not including Continental European learners’ experiences in this report.