Should children in NZ start school on their fifth birthday or with their friends? New research finds benefits of starting school with friends 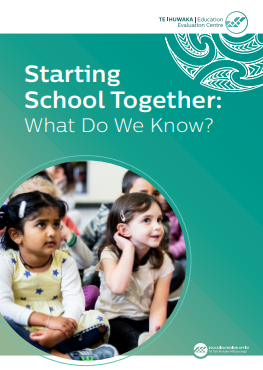 New research, published today, from the Education Review Office (ERO) has found that children starting school at the same time can have many benefits for children, whānau and schools.

Traditionally New Zealand children started school on their fifth birthday. Recently some schools have changed this to children starting school in scheduled groups.

We found that schools who started children in groups found it had real benefits. Of the schools that we spoke to who were using this option, 94 percent are planning to stick with it and many principals thought that other schools should give it a go.

Our report has found that there were benefits to children’s learning and transition into school. Most new entrant teachers and over 90 percent of principals said that starting children in groups meant they settled better into class. Eight out of 10 principals considered that group entry improved new entrants’ engagement with learning.

There were also benefits for the schools. Schools reported that group entry helped with planning for transitions and gave teachers more time to teach – with eight out of 10 principals and teachers agreeing having set start days and children starting in groups reduced time spent on administrative tasks and that it positively impacted on teachers’ work, freeing them up to concentrate on teaching.

Starting children at school in groups is something exciting that schools could think about as an option for welcoming children to school.

This could be particularly interesting to consider in the wake of the impacts from Covid-19. From our ongoing research on the impact of the pandemic on education, we know that teachers have been struggling with their workloads, there are concerns around student engagement, and that stronger connections between families and schools can make a positive difference.

With group entry to school supporting learning engagement, teacher workload, and increased connection between schools and whānau, it could be worth thinking about. At this stage, only 7 percent of schools in NZ have children starting school in groups with their peers.”

ERO recommends that schools thinking about group entry consider their local community’s needs and context.  To support those who may be considering group entry, ERO has produced some resources with key things to think about.  These resources and the full research can be found on the "Our Research" section of our website.